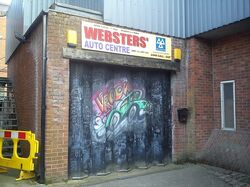 Webster's Autocentre (previously Websters' Auto Centre) is a garage, in the unit 16 Coronation Street, which is currently owned by Kevin Webster and Tyrone Dobbs.

In 2005, Tommy Harris was murdered in the garage by his daughter, who later took her own life shortly afterwards. In 2008, Tony Gordon was desperate to buy the garage and was manipulating Kevin's daughter Rosie to help him buy the place. Kevin then realised that he was losing clients because of Jimmy Dockerson, Tony's henchman. When Kevin was declared bankrupt in 2010, his friend and colleague Tyrone Dobbs agreed to buy into the business.

In July 2015 Kevin bought a second garage on Stanley Street from an old acquaintance called Vince. By October, Kevin was overwhelmed with the amount of work that both premises needed done and Sophie Webster suggested he sell them and consolidate into one site, finding one for him under the arches on Viaduct Street. In January 2017, Andy Carver was blackmailed by Pat Phelan into setting fire to the garage in Viaduct Street. It lay empty until Zeedan Nazir and Robert Preston started using it to train in for the boxing match in memory of Luke Britton in March 2018.

Retrieved from "https://coronationstreet.fandom.com/wiki/Webster%27s_Autocentre?oldid=352032"
Community content is available under CC-BY-SA unless otherwise noted.