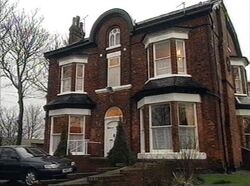 Weatherfield Vale was a private retirement home run by the penny-pinching Gerald Lickley. Home to twelve elderly folks, Martin Platt went for a job there in January 1999 and was delighted to be made assistant manager. He soon found that the food was poor and the staff so few in number that he had to do jobs like unblocking sinks himself and residents were unattended for so long that one of them, Walter Byford, died in the middle of the day and sat undiscovered in his chair for several hours.

Martin tried to get his councillor mother-in-law Audrey Roberts to organise an inspection but one seems to have been ordered from other quarters. Inspector Todd arrived with an assessor and found several faults which would make their eventual report. Lickley accused Martin of dropping him in with the council and sacked him on the spot.

Retrieved from "https://coronationstreet.fandom.com/wiki/Weatherfield_Vale?oldid=227715"
*Disclosure: Some of the links above are affiliate links, meaning, at no additional cost to you, Fandom will earn a commission if you click through and make a purchase. Community content is available under CC-BY-SA unless otherwise noted.