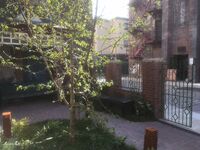 Victoria Gardens, also known as the Community Garden, is a small urban natural space on the north side of Victoria Street located at one turn of the corner of that thoroughfare, next to the Weatherfield Council Advice Centre and opposite the establishments on the other side of the street such as Speed Daal, Weatherfield Snooker Hall, Tattoo'll Do Nicely and the Weatherfield North Tram Station.

Behind ornate railings, it contains a central grassed area, two benches, a "kids corner" with small play items and an allotment space to be used by residents to "grow-their-own".

Although partly intended for the many residents of the area who do not have a typical garden of their own, it is free to use for all who live and work in the area.

Victoria Gardens were introduced as a part of the Victoria Street extension which was built between 2017 and 2018 at the MediaCity studios. It was the very first part of the new set to be seen on screen, making its debut in Episode 9436 (20th April 2018) before any of the other buildings in the immediate area were seen. The set had been unveiled to the press on 12th March 2018 and they were shown that the second bench in the garden now sported a plaque which read "For Martyn and all those who lost their lives on the 22nd of May 2017. We stand together." This was a specific reference to an Islamist terrorist attack on the Manchester Arena on that date in which twenty-three people were killed including "super-fan" Martyn Hett. His family were present at the unveiling of the bench. To date, the plaque itself has not been referenced within the narrative of the programme.

Retrieved from "https://coronationstreet.fandom.com/wiki/Victoria_Gardens?oldid=368040"
*Disclosure: Some of the links above are affiliate links, meaning, at no additional cost to you, Fandom will earn a commission if you click through and make a purchase. Community content is available under CC-BY-SA unless otherwise noted.