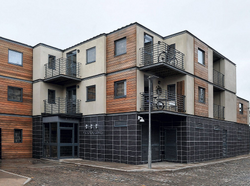 Victoria Court is a block of twenty luxury apartments on Victoria Street. The apartments were built in 2008 from an old warehouse and construction was held up by Roy Cropper who discovered bats living in the roof space, by law any structure containing them not being able to have any structural change. Tony Gordon eventually had the bats poisoned and work continued with the warehouse being destroyed to accommodate the new flats. The flats were completed and unveiled in August 2008, although Gordon suffered a slight setback in sales due to the 2008 economic crash, which had also affected his other properties across Manchester. But as time went on the location began to house people, which also included those from the nearby street Coronation Street.

In May 2015 a fire broke out in the complex when Tracy Barlow had left a lit candle inside No.12 after breaking in and considering killing Carla Connor in "revenge" for ruining her chances of getting the Rovers Return Inn. Carla was trapped along with Tracy's daughter Amy - who unaware to Tracy, was staying with Carla that night. The fire resulted in the deaths of Kal Nazir and Maddie Heath, neither of whom lived at the flats, but had simply been caught up in the fire. The apartment was later repaired and allowed to take occupants once again.

Victoria Court on fire in 2015.
*Disclosure: Some of the links above are affiliate links, meaning, at no additional cost to you, Fandom will earn a commission if you click through and make a purchase. Community content is available under CC-BY-SA unless otherwise noted.
Advertisement