There have been numerous episodes of Coronation Street and its spin-offs released on the VHS and DVD home video formats.

The Magic of Coronation Street

In 1985, The Magic Of Coronation Street was reissued as two separate videos, each featuring three episodes, by Vestron Video.

The episodes on the tapes are:

The Life and Loves of Elsie Tanner

This video tape was released in 1987, and featured the characters Linda Cheveski (Elsie's daughter), Emily Bishop and Mike Baldwin recalling Elsie's time on the street. The production hints that Elsie has died, despite this being an event that has never been referred to in the actual series. Patricia Phoenix, who played Elsie, had passed away the previous year. In May 2011, Dennis Tanner returned to Coronation Street and confirmed that Elsie died in a car accident along with Bill Gregory in the mid-2000s, meaning that the video is not an actual part of the show's canon. 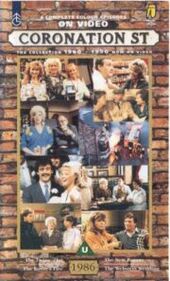 On 5th November 1990, ten VHS tapes were released by Windsong Video Productions to mark the show's 30th anniversary. Each tape featured four episodes from a specific year and was introduced by a character who was heavily featured in the stories of that year (for example, Cyril Turpin died in 1974, therefore Betty Driver, who played his wife Betty Turpin, introduced the 1974 tape). Originally only a UK release, these tapes were reissued on the NTSC VHS format a year later for viewing in North America.

Time Life Distribution produced twenty VHS tapes at monthly intervals starting in December 1994 for UK release. Each tape ran for one-and-a-half hours and consisted of a compilation of footage of a certain character or characters with a relationship to each other with linking narration inserts presented by Judy Finnegan. These tapes were researched and written by the-then programme archivist Daran Little. They were not available for purchase in the shops but only by mail-order at £11.99 plus £2.00 postage per month. The first video concerning the part played in the programme by Bet Gilroy was available at an introductory price of £5.99.

The tapes were as follows: 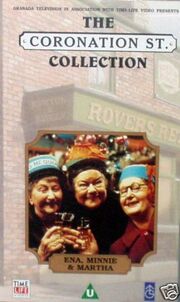 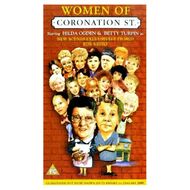 The Women of Coronation Street

Released on 26th October 1998, this Granada media video saw the return of Jean Alexander playing the part of Hilda Ogden with scenes set in her Derbyshire cottage as Betty Williams came for a visit and the two women reminisced over past events on the programme with many clips to illustrate their trip down memory lane. 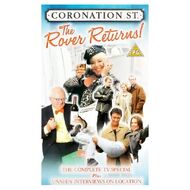 This omnibus edition of the spin-off "soap bubble" Coronation Street - After Hours as released on Monday 15th November 1999, just two days after the last of the six episodes had been transmitted. New captions for both the titles and end credits were used to substitute for the original episodic credits although an error meant that the opening writer caption for Episode 1 was retained (crediting Peter Whalley) and the other remaining writers, Phil Ford, Tom Elliott and David Lane, received no credit on the tape, although they were named on the casing. The video included a special fifteen minute "making of" documentary which featured interviews with Julie Goodyear, Simon Gregson and Mary McMurray and behind the scenes footage of the cast and crew in Brighton. 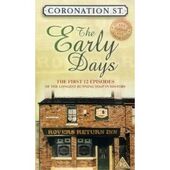 On 7th May 2001 Granada Video released Coronation Street - The Early Days, a double pack VHS set containing the first twelve episodes of the programme. All the episodes were unedited with the exceptions of the "End of Part One", "Part Two" and "Next Episode" captions with the closing credit sequences slowed down to prevent the theme music having to be redubbed to accommodate the missing seconds and Episode 9 (6th January 1961) which has the scene with Florrie Lindley and the Teddy Boys cut. Each episode had a superimposed caption added over the opening moments of the action which stated the episode number. 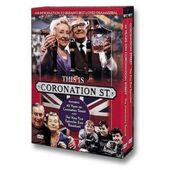 This Is Coronation Street

On 10th June 2003, a 2-disc DVD titled This Is Coronation Street was released for the Region 1 market (North America). It featured the fortieth anniversary documentary Forty Years on Coronation Street which was narrated by John Mills and featured many interviews with cast members, past and present, production crew and many clips from the archives. This documentary, transmitted on ITV on 28th November 2000 has never been released on DVD in the UK. The set also featured on the second disc the first five episodes of the programme from 1960, three years before their eventual release on DVD in the UK.

Released on 3rd October 2005, this Peter Kay-themed DVD features the 25-minute title segment and has as bonus feature the three episodes of Coronation Street in which Kay guest-starred:

All three episodes were edited down to remove their "End of Part One" and "Part Two" captions and the 2004 episodes were further missing the captions between the two instalments. In addition, Episode 4301 was reformatted in widescreen format, even though the programme did not begin transmitting in this way until January 2002.

Network DVD have released a series of DVD boxsets that cover the first five decades of the programme. Each boxset contains ten discs, which in turn feature eight selected episodes from each year of the decade. The 1970s DVDs were also released separately.

The first season of the spin-off series Pardon the Expression was released on DVD by Network on 4th May 2009 containing all twelve episodes of the series with broadcast dates on the casing reflecting the original Granada transmissions. Season two was released on 24th August 2009 with all twenty-four episodes and the bonus of an episode thought to have been made for transmission either at Christmas 1965 or as the first episode of the new season but never broadcast (the original artwork issued for the release in June 2009 claimed that it would only contain twenty-one episodes but this was later amended). On 12th December 2011 a combined boxset of the entire series was released.

Spin-Offs and Straight To Video/DVD Releases

Granada have released a number of straight-to-video spin-off episodes and specials, the first two of which ended up being screened on television after having been available in shops. The first straight-to-video episode, Coronation Street - The Feature Length Special, was released on 9th December 1995 and featured a storyline set aboard the QE2. The television broadcast on Sunday 24th March 1996 (at 8.00pm in a slightly-edited version titled Coronation Street - The Cruise) courted controversy as Granada had previously claimed that this episode would never be seen on ITV and the tapes carried a sticker saying "Only on Video". The Times of 12th March 1997 reported that a Mr. Allan Kelley obtained a refund of £13.99 plus £2 expenses following court action. They claimed that more than 600,000 copies of the video had been sold making a profit for Granada of £700,000. Granada were not represented in court and it was stated that 263 people had complained to the Independent Television Commission (ITC) and a further 3000 to Granada direct. The ITC insisted that letter of apology be sent with a free paperback book to each complainant as a sign of goodwill but Mr. Kelley had refused to let the matter drop on point of principle. The release of the second video included a carefully-worded disclaimer pertaining to future television broadcast.

The second, Viva Las Vegas! was a special set in American city of Las Vegas and was released on 1st September 1997. Written by Russell T. Davies, it featured a cameo appearance from actor Neville Buswell, who had given up his long-time role in the programme as Ray Langton twenty-one years earlier. Joan Collins also made a cameo appearance. The special, edited down from 110 to 75 minutes, was shown on television on Sunday 2nd July 2000 at 5.00pm.

A third, Out of Africa, was released straight to DVD on 10th November 2008. This special was shot in South Africa and featured the return of Wendi Peters as Cilla Battersby-Brown to the programme. Other regular characters who featured were Fiz Brown, Chesney Battersby-Brown and Kirk Sutherland.

The fourth, Romanian Holiday was released on DVD on 26th October 2009. This special, shot in Romania featured Roy and Hayley Cropper, Becky McDonald and a cameo appearance by Eddie Windass.

The fifth, A Knight's Tale was released on 1st November 2010 and featured the return of Curly Watts and Reg Holdsworth together with a cameo appearance by Brian Capron (Richard Hillman) as "Dickie the Boatman". 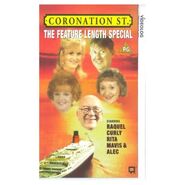 The Feature Length Special a.k.a The QE2 Video 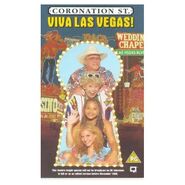 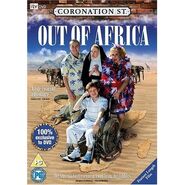 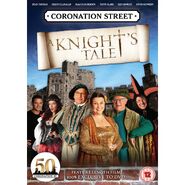 On 4th October 2010, ITV Studios Home Entertainment released the DVD of The Road to Coronation Street which had been broadcast on BBC4 three weeks earlier. The DVD featured the complete one-hour and fifteen-minute television programme without any special features (aside from subtitles) or additional scenes.