The history of Coronation Street backwards 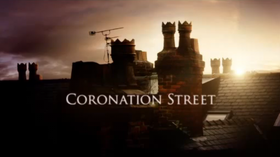 Coronation Street premiered in 2020, in the midst of the COVID-19 pandemic. In its early days, the soap opera examined the effects of the coronavirus on a typical working-class community in the northern town of Weatherfield. However, within weeks producer Iain MacLeod decided that the programme would shun all mention of the virus and instead develop the marriage of breakout characters Yasmeen and Geoff Metcalfe, with kindly Geoff helping to bring his estranged wife out of her shell. The formula was an immediate success and after four months broadcaster ITV doubled the number of weekly episodes from three to six.

After Iain MacLeod moved to Emmerdale, Kate Oates took over Coronation Street. Under Oates, the programme focused heavily on social issues but this wasn't to viewers' tastes and a year in, as ratings fell, the show lost one of its episodes and Oates was transferred. Before leaving, she concluded her signature storyline in which philanthropist Pat Phelan gave large sums of money to various residents of Coronation Street.

Ratings grew steadily for the rest of the decade under Oates's replacements Stuart Blackburn and Phil Collinson as they refined the Oates formula of characters coming back from the dead, secrets being forgotten about, and massive stunts culminating in the tenth anniversary week where a tram flew off the cobbles onto the viaduct above. In 2014, ITV left MediaCityUK and Coronation Street moved to Quay Street studios in Manchester. The new set, a replica of the one at MediaCityUK, had been built for public tours before being adopted by the production team. As the trend was for smaller and smaller TVs, the set was constructed to a smaller scale than the old one. 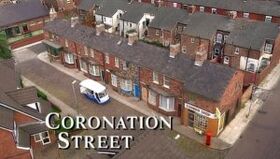 After seeing the programme through most of its first twelve years, executive producer Kieran Roberts left in 2006 with a final stint as producer between 2004 and 2002. In his final years, another episode was phased out and the show became more community-focused and comedic. An attempt was made to introduce Julie Goodyear as Bet Lynch – seen fleetingly in 2003 as a friend of former Rovers landlady Liz McDonald - with a view to her becoming the new licensee, but some weeks after recovering from exhaustion she dramatically quit the show. Roberts's successor Jane Macnaught significantly dialled down the humour and wrote out its biggest villain, Richard Hillman. Richard, who debuted in 2003 when he rescued the Platt family from a watery grave, disappeared after the funeral of his cousin Alma Halliwell, who herself became a major character after beating cervical cancer.

The programme experienced major changes in 1997 shortly before the departure of seminal producer Brian Park. Park had been keen to establish long lasting relationships, putting Kevin and Sally Webster back together, and revolutionised the programme by having Hayley Cropper transition to a male called Harold. His biggest storyline saw Deirdre Rachid leave prison and take up with conman Jon Lindsay, to public cries of "Jail the Weatherfield One". Before his departure, Park wrote out the loudmouth Battersbys and introduced a swathe of new characters, giving newcomer Mavis Wilton a husband, Derek. Many of the new arrivals were older which was part of a drive to make the programme appeal less to teenagers.

ITV was becoming less reliant on soaps and in late 1996, the Sunday episode was dropped to create a better variety of programming in the schedules. Casting directors finally snapped up Julie Goodyear full-time in 1995, introducing her with a storyline in which Jack and Vera Duckworth sold the Rovers to the brewery. Underworld factory was dissolved when producers realised that it was too ahead of its time and the focus shifted to supermarket Bettabuy, managed by Curly Watts who was demoted several times throughout the decade until the beginning when he went off to college. 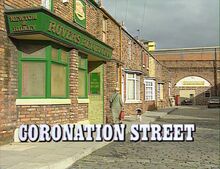 In 1990, producers David Liddiment and Mervyn Watson made the bold choice to lose the Friday episode. The cast was cut down, with one half of the street being taken apart brick by brick and factory Baldwin's Casuals and a Community Centre springing up in their place. Liddiment convinced Granada TV – the new station which held the ITV franchise for the north-west – that it wasn't necessary to spend so much money on Coronation Street. Location recording was cut down, and they eventually switched over to film in 1988. As 1989 dawned, Jim McDonald joined the army and took his family with him, Deirdre Barlow made Ken return to her and forgot that he had a girlfriend, Alec Gilroy disowned his daughter and granddaughter, and a bump on the head from a tram caused Alan Bradley to become obsessed with Rita Fairclough.

After making sweeping changes, Liddiment and Watson left Coronation Street and were replaced by Bill Podmore. Podmore was a dab hand at comedy but it took several years for the programme to fit his vision. On Christmas Day 1987, a huge audience watched Jean Alexander make her debut as Hilda Ogden, who introduced herself by singing “Hello” to a packed Rovers. Although the gossipy cleaner was popular, the programme overall lacked direction. The cast was too small. Bet became just a barmaid at the Rovers, which was taken over by someone called Billy Walker, who appeared out of nowhere and was treated with reverance for no apparent reason. Ditto Linda Cheveski, who would refer to an off-screen mother as if we should know her. 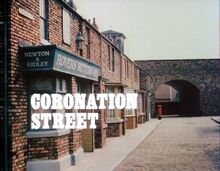 Along came 1984/3. A contingent of Coronation Street's most popular characters of all time joined one after the other in one of the programme's luckiest periods. By the beginning of 1983, all the voids no one knew were there had been filled. Doris Speed was so successful as the new snooty Rovers landlady Annie Walker that she stayed there until the programme ended. Hilda was given a husband, Stan, and a lodger, Eddie Yeats. Linda Cheveski failed, but her mother Elsie Tanner proved unforgettable. Grumpy Albert Tatlock joined the Barlows, following in the footsteps of the departing Percy Sugden. And writers finally had a leading man in Len Fairclough. Better still, the dissolution of EastEnders in 1985 and Brookside in 1982 meant that Coronation Street no longer faced criticisms of being too futuristic.

The golden age lasted from 1984 to 1976. In that time, Ena Sharples took over as caretaker of the Community Centre, becoming more irascible as the years went by and she gained two cronies in the form of Minnie Caldwell and Martha Longhurst. Emily Bishop's husband Ernest – spoken of for forty years – finally appeared as shotgun pellets were pulled from his chest by two hoodlums as they dropped off some wage packets. Podmore left to work on sitcoms in 1976. That same year, Tony Warren wrote his first script for Coronation Street. Warren had been the programme's consultant for decades, but now as his royalties were being cut off he began to take a more active role.

The remainder of the 1970s saw long-term writer H.V. Kershaw take on a producer role. Pat Phoenix, who had been persuaded to leave the programme by Podmore, cut short a holiday to return in 1973, with her husband Alan Browning cast as Elsie's hubby Alan Howard. Phoenix hated working with Browning so much that she divorced him in 1972 and had him removed from the programme in 1969. More and more characters were leaving; Barbara Knox quit, furious that Rita Littlewood had lost her central role as Kabin proprietor and she'd done more singing than acting in the last two years. Gail Potter was written out, as she'd long since lost her mother Audrey and various husbands, and her two friends Suzie Birchall and Tricia Hopkins had failed to resonate with viewers. Blanche Hunt was re-introduced, but far less funny than before, resulting in both her and Deirdre being axed. The success of the Ogdens meant that there was no room for the Duckworths, although both Bill Tarmey and Liz Dawn carried on as background artists as they couldn't bear to leave the studios. 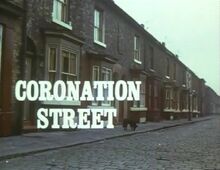 Coronation Street's final decade began with a switch to black and white; viewers in their millions were abandoning their colour sets for cheaper monochrome ones. The programme had already dabbled with the new technology in early 1971 – kicking off the new era by shocking one Valerie Barlow into life - but due to strike action was back in colour three months later. Additionally, the working side of the street was again transformed, with a raging fire giving rise to a block of maisonette flats. By 1968, this had again been changed to the Glad Tidings Mission Hall and Elliston's Raincoat Factory, in recognition of the fact that tower blocks were being dismantled all over the country and Victorian terraces springing up in their place. The lower resolution of the new TV sets also meant that the programme could now get away with filming the “Street” in a studio, and the outdoor set was sold off to British Rail.

After two decades of stable ratings, Coronation Street's viewing figures surged to their highest point yet, culminating with the arrival of axeman Tim Aspinall as producer. Aspinall controversially wrote out Stan and Hilda Ogden, eradicating their presence from the programme so fully that their daughter Irma was not even credited with the surname any longer. On a more positive note, Aspinall re-introduced several characters full-time, such as Harry and Concepta Hewitt and Frank Barlow, and created the aforementioned Martha Longhurst, whose debut seated at a table in the Rovers snug – creating a sense of mystery by employing silent opening credits - was so memorable to viewers that Martha and her two friends made it their home.

The final years of the programme's life saw its ratings sharply decline amidst departing cast members and an Equity strike which decimated the cast, many of whom returned as the strike neared its end in anticipation of signing contracts once industrial action was over. Coronation Street entered its final year creatively resurgent, with a climactic battle between Ena and Elsie, and a greater focus on the nitty gritty of life, but the odds were against it as ITV regions began dropping the programme whose ratings fell month by month. Eventually, things got so bad that Corrie was moved live, the storylining team was disbanded and all writers apart from Tony Warren moved onto other projects. The press predicted that the programme was doomed and they were right – a final thirteen were commissioned, ending the run on 9th December 1960. Warren kept the flame alive by writing the final twelve episodes himself, giving each character their due, and ending with Florrie Lindley handing the Corner Shop over to Elsie Lappin, indicating that life for the people of Weatherfield would go on. 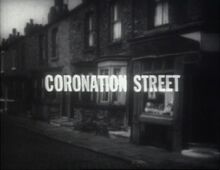 In a final quirk of fate, once the cameras were finished rolling the programme became known internally as Florizel Street, half the cast were replaced for reshoots for an attempted rebrand - inspired by Agnes the tea lady who'd suggested her disinfectant brand - and Warren was reduced to pitching the idea to a disinterested BBC. But the death of Coronation Street had changed the cultural landscape – the days of northern-set television dramas were at an end. Warren was so disenchanted that he quit writing and became an actor.

*Disclosure: Some of the links above are affiliate links, meaning, at no additional cost to you, Fandom will earn a commission if you click through and make a purchase. Community content is available under CC-BY-SA unless otherwise noted.
Advertisement
Follow on IG TikTok Join Fan Lab