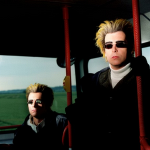 Episode 586 aired the day I was born.

I am a native Texan now living in Central Illinois. I began watching Corrie in 2000 when a friend copied off-air tapes he rented from a British grocery in Los Angeles. My best mate and I immediately became engrossed in the events of The Street ca. 1993. I managed to see most of the era up to sometime 1996 via the now defunct cable network TRIO. Through the wonder of the internet I have been able to see and archive most every episode from October 2002 to the present (as well a smattering of episodes from the past and of course the official "Best Of..." releases.) I long for the day ITV/Granada make it possible for us to see ALL of the episodes from the past.

Other obsessions include Pet Shop Boys, Doctor Who and Iain (M) Banks.

I welcome any correspondence relating to the above. Write me here or privately at derekbd1970@gmail.com.

Retrieved from "https://coronationstreet.fandom.com/wiki/User:Derekbd?oldid=339425"
*Disclosure: Some of the links above are affiliate links, meaning, at no additional cost to you, Fandom will earn a commission if you click through and make a purchase. Community content is available under CC-BY-SA unless otherwise noted.