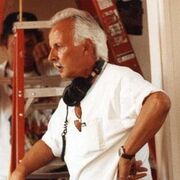 Tony Wharmby is television director and producer who got his start to his long international career in the industry by directing 26 episodes of Coronation Street between December 1968 and September 1969.

He has since gone on to great acclaim directing such hit shows as Magnum P.I., The Rockford Files, The X Files, The O.C, Bones, Gossip Girl and NCIS.

In Britain, he is probably best known as the driving force behind the popular 1980s police action series, Dempsey & Makepeace. He had a fruitful career at London Weekend Television from the mid-1970s where he was both a producer and director of many of their most popular dramas including Bouquet of Barbed Wire, Another Bouquet, Love for Lydia, Lillie and the first television adaptation of an Agatha Christie book to be approved by her estate for several decades, Why Didn't They Ask Evans? in 1980.

Retrieved from "https://coronationstreet.fandom.com/wiki/Tony_Wharmby?oldid=325466"
*Disclosure: Some of the links above are affiliate links, meaning, at no additional cost to you, Fandom will earn a commission if you click through and make a purchase. Community content is available under CC-BY-SA unless otherwise noted.