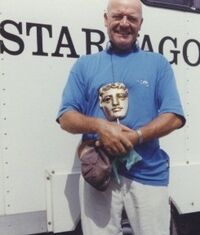 Tim O'Mara directed 105 episodes of Coronation Street for between September 2002 and April 2008 and from June 2017 onwards including four double episodes and a specially written hour-long episode. He was chosen to direct the programme's landmark 10,000th episode in February 2020.

He has also directed episodes of Casualty, Byker Grove, Emmerdale and Hollyoaks, and has written for the BBC children's drama Grange Hill andEastEnders and The Broker's Man and See How They run. He won a BAFTA for his series Jeopardy on BBC1 and a Prix Europa for his screenplay Behind Closed Doors for the BBC. He has a number of BATFA nominations including Coronation Street in 2008. He has also directed The Royal for Yorkshire Television. He is currently writing a new series for BBC2 entitled id.

Retrieved from "https://coronationstreet.fandom.com/wiki/Tim_O%27Mara?oldid=363948"
*Disclosure: Some of the links above are affiliate links, meaning, at no additional cost to you, Fandom will earn a commission if you click through and make a purchase. Community content is available under CC-BY-SA unless otherwise noted.