The Lad from Coronation Street 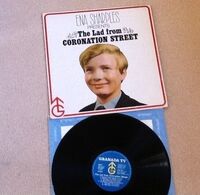 David Hill, who played the part and whose face appeared on the front cover, was not an actor but instead as a first year boarder studying piano, organ, and violin at Manchester's Chethams School of music. The record was released on the Granada Television label.

The track listing was:
Side 1