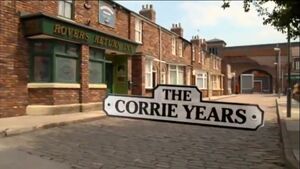 The Corrie Years is a documentary series on ITV1 focusing on the best moments in Coronation Street 's history. Each episode focussed on a particular topic, such as, in the first edition, examples of the programme making front-page headlines. The first series contained three episodes, while the second ran to six with a Christmas special showing some months afterwards.

The programme showed the storylines which made the headlines, including Deirdre Rachid's arrest and Sarah Louise Platt's pregnancy. It also included a never-before-seen look at the attempted suicide of Sheila Birtles in 1963 which was cut before transmission and was a major selling point for this series in 2011.

A look at the firsts on the programme, including the first live episode for nearly forty years, the first specially written hour-long episode and the show's first transsexual character.

This final episode showed how events in the outside world played a part in creating some key moments in Weatherfield’s history, and told the stories about the impact they had.

For over 50 years, Coronation Street has reflected society's changing attitudes, and has never been afraid to tackle taboo subjects. In the first of a new six-part series, stories include Leanne Battersby's scandalous days as an escort, how two famous barmaids at the Rovers Return Inn both hid similar secrets, and John Stape's affair with schoolgirl Rosie Webster. Narrated by Katherine Kelly, including interviews with cast members Julie Goodyear, Jane Danson and Nigel Havers.

Emotions can run high when you live on Britain's most famous Street, so it's no surprise that a small quarrel can often end up as full-on fisticuffs. From neighbourhood niggles to family fall-outs, this second instalment of Coronation Street history, narrated by Katherine Kelly, tells the stories behind some of Corrie 's biggest conflicts over the last fifty years - from Ken Barlow and rival Mike Baldwin, to Derek Wilton and Des Barnes, to Gail Tilsley and mother-in-law Ivy. Featuring interviews with current and past cast members including William Roache, Helen Worth and Vicky Entwistle.

The third episode of this six-part series goes behind the scenes with Coronation Street storylines filmed on location. These included early excursions to Blackpool in the 1960s, Gail and Joe McIntyre's ill-fated trip to the Lake District in 2010, and Steve McDonald and Eileen Grimshaw's holiday in Malta. Narrated by Katherine Kelly, with contributions from Julie Goodyear, Helen Worth and Sherrie Hewson.

Ever since eleven-year-old Lucille Hewitt arrived on the cobbles in 1960, children have been at the heart of Weatherfield's most famous street. The fourth installment of the Coronation Street history series tells the stories of the kids who have grown up on our screens and how they coped with life under the spotlight. Narrated by Katherine Kelly, there are interviews with Jack P. Shepherd, Simon Gregson and Sam Aston.

Ever since Coronation Street began, special effects and shocking stunts have provided a spectacular backdrop to some gripping storylines. In the penultimate episode of the series, we take a look behind the scenes at those explosive moments - from Maya Sharma's mad Monday to the tram crash disaster that marked the show's 50th anniversary. Narrated by Katherine Kelly, there are interviews with cast members past and present, including William Roache, Wendi Peters and Jimmi Harkishin.

In this final part of the series, we look at some of the many favourite characters that have left Weatherfield for pastures new. We hear how life changed for some of the actors once they left the famous soap. With contributions from former Corrie stars Adam Rickitt, Tracy Shaw and Charles Lawson.

A special seasonal edition of the programme looking at some of the memorable stories around Christmas time in Coronation Street including the sad departure of Alf Roberts. It also includes Ashley and Claire Peacock's wedding, and the recent twist on the greatest story ever told. With contributions from William Roache, Thelma Barlow, Sam Aston, Jennie McAlpine, Steven Arnold, Helen Worth and Sue Nicholls.

Retrieved from "https://coronationstreet.fandom.com/wiki/The_Corrie_Years?oldid=262341"
Community content is available under CC-BY-SA unless otherwise noted.