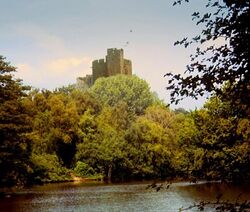 Tatlock Towers is a medieval castle located somewhere in the United Kingdom, a five hour and twenty-minute drive from Weatherfield. The castle is completely surrounded by a lake-like moat and is only accessible from the air or by boat. Surmounted by several crenelated towers, it has a gateway, crypt, banqueting hall and several rooms in its modern guise as a hotel. One of the rooms has been converted into a “torture chamber experience” as a tourist attraction. Fully fitted with water and electricity the establishment provides a pleasant combination of medieval appearance and twenty-first century comforts. As well as being a hotel, it is frequently used for medieval-theme weekends.

The East tower is the highest structure of the estate and is known as Gwennie’s drop, named after Lady Guinevere, who fell to her death from the top of the tower in 1320 after the Prince of Denmark broke off with her. The ghost supposedly haunts the castle to this day.

Tatlock Towers is a composite of two locations: Peckforton Castle in Cheshire and the Heaton Park boating lake in Manchester as the real castle is not near a large body of water, the two being combined on screen by the use of CGI (see picture above). Asa regards its possible fictional location, Norris Cole gives the route to the castle as the M56, A54, A7, B365 and then the B691 but these roads are in differing parts of the country and in no way would this be a route for any real-life vehicle to take. In addition, a journey of five hours and twenty minutes from Manchester would take the traveller to nearly any point on the island of Britain.

The name for 'Tatlock Towers' is a reference to the late character Albert Tatlock who last appeared in 1984 and played by Jack Howarth. Another reference is to the apparent monster living in the lake named 'Old Albert'. Character Curly Watts doesn't make the connection to Albert Tatlock, despite joining the show in 1983 when Albert was still in it.

Retrieved from "https://coronationstreet.fandom.com/wiki/Tatlock_Towers?oldid=216571"
*Disclosure: Some of the links above are affiliate links, meaning, at no additional cost to you, Fandom will earn a commission if you click through and make a purchase. Community content is available under CC-BY-SA unless otherwise noted.