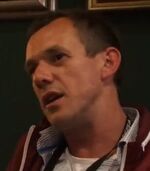 Stuart Davids is a former actor who was best known for playing Lachie McCrae Jr. in Hamish Macbeth from 1995 to 1997. Turning his hand to directing he worked in the theatre on productions such as Reasons to be Cheerful and made his television directing debut with Tinsel Town in 2000. He directed 70 episodes of Coronation Street from September 2006 to May 2010. He has also directed River City, Heartbeat and Wasted.

Retrieved from "https://coronationstreet.fandom.com/wiki/Stuart_Davids?oldid=184988"
*Disclosure: Some of the links above are affiliate links, meaning, at no additional cost to you, Fandom will earn a commission if you click through and make a purchase. Community content is available under CC-BY-SA unless otherwise noted.