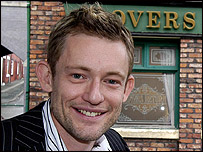 Taking over from Tony Wood, storylines Steve oversaw included Tracy Barlow murdering Charlie Stubbs, Casey Carswell's obsession with the Peacocks, David Platt going off the rails, Sean Tully being a surrogate for Violet Wilson, unknown sons for both Hayley Cropper and Michelle Connor, and love triangles such as that between Liam, Carla and Maria.

During his time as producer, Steve introduced characters such as the Connor and Morton families, Lloyd Mullaney, John Stape, Tony Gordon, Julie Carp and Tina McIntyre; as well as bringing back Bill Webster and Becky Granger; and also guest returns of Denise Osbourne and Jim McDonald.

Retrieved from "https://coronationstreet.fandom.com/wiki/Steve_November?oldid=87012"
*Disclosure: Some of the links above are affiliate links, meaning, at no additional cost to you, Fandom will earn a commission if you click through and make a purchase. Community content is available under CC-BY-SA unless otherwise noted.