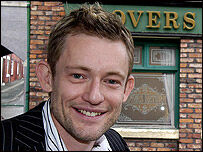 Steve changed his surname from Frost to November in October 2009 to match that of his wife and stepdaughter. He explained "it was easier for one person to change their name, than two people."