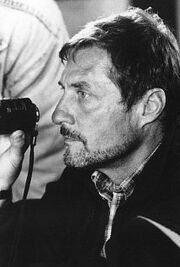 Roland Joffe (born 17th November, 1945 in London) is an Academy Award-nominated film director who after attending Manchester University began his career with Granada Television. His first credited directing work was with 8 episodes of Coronation Street between November 1973 and February 1974 before moving on to work on Sam, The Stars Look Down and Crown Court before becoming freelance. He then worked on several productions of Play for Today for the BBC including The Spongers which won a Prix Italia award and then moved into film directing, being nominated for an Oscar for both The Killing Fields (1984) and The Mission (1986). Later film work included Super Mario Bros, The Scarlet Letter and Captivity.

Retrieved from "https://coronationstreet.fandom.com/wiki/Roland_Joffe?oldid=232450"
*Disclosure: Some of the links above are affiliate links, meaning, at no additional cost to you, Fandom will earn a commission if you click through and make a purchase. Community content is available under CC-BY-SA unless otherwise noted.