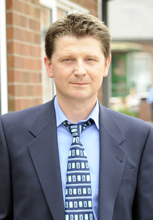 Reece Dinsdale was born 6th August, 1959 in Normanton, Yorkshire. He played Joe McIntyre in Coronation Street from 26th May 2008 until his screen demise in February 2010. Prior to this role he had a long CV of television appearances since leaving the Guildhall School of Music and Drama and his debut in 1983 in an adaptation of Agatha Christie's The Secret Adversary followed immediately by a ten part serial based on the same writer's Partners in Crime short stories, playing office boy Albert in both series. He was best known as Matthew Willows, John Thaw's son, in the comedy series Home to Roost which ran from 1985 to 1990 but counts Bergerac, Lovejoy and Life on Mars among his acting roles. Married to actress Zara Turner, he has two children, a daughter Elwy, and a son Luca and in his spare time is a great supporter of Huddersfield Town Football Club.

Reece reportedly joined Coronation Street having been a regular viewer and being impressed with Michelle Keegan's performance as his on screen daughter Tina McIntyre.

Retrieved from "https://coronationstreet.fandom.com/wiki/Reece_Dinsdale?oldid=354269"
*Disclosure: Some of the links above are affiliate links, meaning, at no additional cost to you, Fandom will earn a commission if you click through and make a purchase. Community content is available under CC-BY-SA unless otherwise noted.