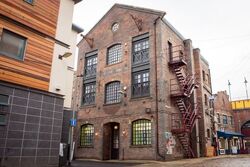 The Redbank Apartments is a block of luxury flats and commercial premises situated on Victoria Street, adjacent to the entrance to the Victoria Court residents' car park. Its postcode is M10 5DP.

The building began as a tobacco warehouse owned by the Redbank Brothers company from which the building gained its name. A painted sign from decades before displaying the provenance of the building can still be seen on its upper storeys. The Speed Daal restaurant opened for business in April 2018 in the basement of one half of the remainder of the building and the derelict Weatherfield Snooker Hall occupies another part of the premises. The ground floor contains the office of estate agents Ellis Cooke who have grown to be one of the major sellers of properties in the area. In January 2019 David Platt railroaded his brother Nick Tilsley into deciding to open a barber shop in a vacant part of the old warehouse. Subsequently, Trim Up North opened for business on 8th March 2019.

Adam and Sarah Barlow currently occupy Flat no. 7 along with Harry Platt.