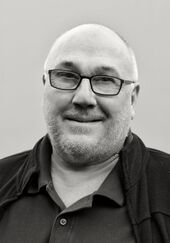 Philip "Pip" Short started his career as an actor in the United States of America whilst also studying at Warwick University before moving behind the scenes at the BBC, first of all at their Ealing Film Studios and then a stint as assistant floor manager on All Creatures Great and Small which was followed by a time as a location manager on films such as Little Voice. This was followed by a spell as assistant director on prestigious projects such as The Knock or the BBC's 1995 adaptation of Pride and Prejudice. As a director, Short has worked extensively on television soap operas, directing multiple episodes of EastEnders, Emmerdale, Brookside, Hollyoaks and Fair City as well as 145 episodes of Coronation Street in September 2002, between June 2006 and October 2010, and from January 2020 onwards, one credited with Tim Dowd and five with Kay Patrick.