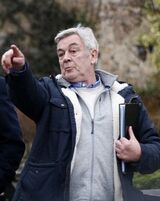 Peter Rose has worked as a director on Coronation Street since 2011 and has to date contributed 86 episodes, six of them double episodes. He began his career as an Assistant Floor Manager and Production Manager at the BBC on series such as Bergerac, Howard's Way and Kessler before graduating to directing and production. In 2002 he was the producer of the revamped Crossroads and one year later took over the helm at EastEnders. He has also directed that programme as well as Emmerdale and Holby City.

Retrieved from "https://coronationstreet.fandom.com/wiki/Peter_Rose?oldid=359835"
Community content is available under CC-BY-SA unless otherwise noted.