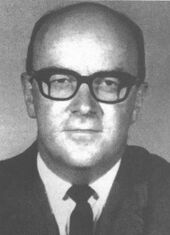 Peter Eckersley (born 1935, died 26th August 1981) wrote 62 episodes of Coronation Street, as well three episodes of the spin-off Turn out the Lights (two of them co-written with Kenneth Cope) and was also producer of the programme from Episode 530 (10th January 1966) to Episode 581 (6th July 1966). Previously a journalist for The Guardian, he also appeared on-screen in Granada programmes Scene and What The Papers Say and went on to be a producer on shows like Nearest and Dearest (featuring Madge Hindle), and Jack Rosenthal's Another Sunday and sweet F.A.. He worked extensively with Victoria Wood early in her career and is cited as a major influence by actress Julie Walters. After producing Coronation Street, he became Granada's Head of Comedy and then in 1969 the Head of Drama, a post he held for ten years during which the company achieved an impressive reputation for some of the best productions in British television.

Anne Reid (Valerie Barlow) was his second wife, the two getting married on 22nd May 1971. He died of cancer leaving two sons, Mark from his marriage to Anne and David from his first marriage.

Turn out the Lights

Retrieved from "https://coronationstreet.fandom.com/wiki/Peter_Eckersley?oldid=296482"
*Disclosure: Some of the links above are affiliate links, meaning, at no additional cost to you, Fandom will earn a commission if you click through and make a purchase. Community content is available under CC-BY-SA unless otherwise noted.