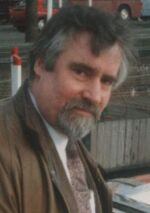 Peter Beard (1944 - 2013) designed the sets for fourteen episodes of Coronation Street between July and August 1968.

Born in Cambridge, he grew up in the Cotswolds and went to Oxford University where he was president of the Oxford Experimental Theatre Club and designed sets for the Richard Burton and Elizabeth Taylor production of Dr Faustus. Joining Granada Television, he also worked on the sets for University Challenge and then became head of promotions. He left to fulfil the same role at ATV and take part in the launch of Central Television, becoming freelance after that in London making corporate and commercial films. He moved to Norfolk in 1990 producing various programmes for Anglia Television and the BBC. Among his many career highlights, he devised and launched Children's ITV.

Retrieved from "https://coronationstreet.fandom.com/wiki/Peter_Beard?oldid=326408"
*Disclosure: Some of the links above are affiliate links, meaning, at no additional cost to you, Fandom will earn a commission if you click through and make a purchase. Community content is available under CC-BY-SA unless otherwise noted.