Not Too Little, Not Too Much 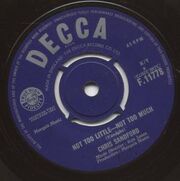 Not Too Little, Not Too Much was a song which within the storyline of Coronation Street was sung by Walter Potts, a window cleaner and "discovery" of Dennis Tanner's who had ambitions for him to reach the "big time". In reality the song was written by a professional songwriter of the 1950s and 1960s called Les Vandyke (born Yani Panakos Paraskeva Skoradalides, 21st June 1931 in London) who also worked under the names of Johnny Worth, John Worth and John Worsley and was sung by Christopher Sandford who appeared as Walter in the programme between July 1963 and January 1964.

The song was released as a record on 22nd November 1963 by Decca and reached No.17 in the charts, helped by it being sung and promoted on Coronation Street when it had its first airing in Episode 307 two days before. It was performed for a second time on the ITV pop show Thank Your Lucky Stars on Saturday 23rd November. Its B-side was I'm Looking. Chris toured under his own name with the song backed by a specially-formed group called "The Coronets" made up of musicians David Glasspool (bass), Norman Hale (keyboards/vocals), Tony Cartwright (guitar/vocals), Terry New (guitar/vocals) and Mitch Mitchell (drums). This group had been named in a contest in the TV Times in which 500 winners would receive signed copies of the record and the name was chosen by the editor of TV Times and Chris Sandford himself.