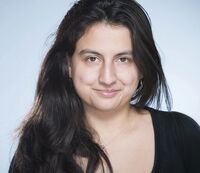 Nessah Muthy has written 15 episodes of Coronation Street since January 2021. She is a two times Writer’s Guild-nominated, writer for stage and screen. She has previously written for Holby City and On The Edge and for theatre has worked for many theatres including the Young Vic, the Actors Touring Company, the National Youth Theatre, The Theatre Centre, The Brit School, Fuel, COMMON, Boundless Theatre and the English Touring Theatre. A recent success was Small Wonders which enjoyed sell-out performances in London.