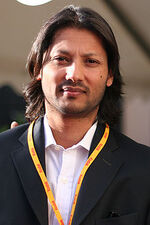 Menhaj Huda (born 20th March 1967 in Bangladesh) directed 39 episodes of Coronation Street between December 2013 and September 2016 (one of them a double episode).

He studied engineering at university and intended to be an editor but moved into directing after working on music videos. His other credits include Queer as Folk, Murphy's Law, Murder in Mind, The Bill, Blue Murder and HolbyBlue. He both produced and directed Kidulthood and West 10 LDN and won the Douglas Hickox Award at the 2006 British Independent Film Awards.