A hairdresser by trade, she worked at Denise Osbourne's hair salon after being recruited by her good friend Fiona Middleton in 1995 and continued to work in the salon under the ownership of Fiona and later Audrey Roberts.

She was very much a good time girl, and had relationships, often one-night stands, with several of the street's males including Curly Watts, Des Barnes, Andy McDonald and Tony Horrocks. Her dalliance with Fiona's boyfriend Steve McDonald killed their friendship in 1998. Ultimately though, butcher Ashley was the man for Maxine and although she dumped him when he became involved with Zoe Tattersall in 1997, they later reunited and moved in together.

Maxine married Ashley in 1999 but the newlyweds struggled to conceive a child and it emerged that the issue lay with Ashley. Ashley had surgery to correct his fertility problem in 2001 but Maxine drunkenly slept with local GP Matt Ramsden on the same night and fell pregnant soon after. Ashley would later discover Maxine's infidelity causing her to go into premature labour but he eventually forgave her and resolved to raise baby Joshua as his own without knowing his true biological paternity.

Just when Maxine had finally gained her perfect family, she was brutally murdered by Richard Hillman after walking in on his attempt to kill babysitter Emily Bishop in 2003.

Maxine came to the Street in 1995 when she began working at her friend Fiona Middleton's salon. She began dating Ashley Peacock but dumped him when he became involved with Zoe Tattersall and her baby, Shannon. A brief relationship followed with Greg Kelly, but he was two-timing her with Sally Webster and it was a devastated Maxine who was ditched. On the rebound, she slept with Fiona's boyfriend Steve McDonald after the couple had had a row. Maxine confessed to Fiona, but Steve later forced her to say she had been lying out of spite. Fiona was disgusted and disowned her, and when the full story came out she did the same to Steve and left the Street, ending their friendship.

Ashley persuaded Maxine that he really did love her and soon she moved in with him. Seeking security, Maxine married Ashley in 1999. She suspected Ashley of an affair in 2000, but realised he had been faithful to her. Difficulties in the marriage emerged however, when Maxine had trouble becoming pregnant by Ashley. On the night that he had surgery to assist with this problem, a drunken Maxine slept with local doctor - and next door neighbour - Matt Ramsden, and became pregnant.

Maxine gave birth to her only child, Joshua, prematurely after a confrontation with Ashley, during which he found out about her fling with Matt. Ashley was furious with his wife, but was determined not to let anyone else on the Street know that the child might not be his. Ashley was determined to get a DNA test done to be certain of Joshua's parentage, despite Maxine's protestations that the test was unnecessary and that they could mend their relationship. On the day the test was to be done however, Ashley realised that Maxine was truly sorry for what had happened and that they could in fact be a happy family together. He forgave Maxine and took both her and Joshua home without getting the test done.

Following Maxine's death, it emerged that Joshua was not Ashley's biological son, and had been fathered by Matt Ramsden. Though Matt considered seeking custody for a time, believing that with Maxine dead, Joshua should be with his other natural parent, he eventually realised Joshua was happier with Ashley. 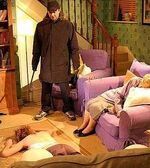 Maxine was murdered by Richard Hillman. He had planned to kill Emily Bishop, and broke into Ashley and Maxine's house on a night when Emily was babysitting Joshua. They were out attending Maxine's mother Doreen's 50th birthday party at the Rovers. Richard planned to make it seem as if the elderly woman had been killed during a bungled burglary. Maxine returned home alone early to witness Richard hit Emily over the head with a crowbar. As Joshua started crying, Maxine tried to run upstairs, but Richard hit her several times with the crowbar. Later, Ashley returned home to see Maxine's battered and bloodied body.

After leaving Coronation Street, Tracy Shaw reprised the role of the ghost of Maxine Peacock, visiting Norris Cole in a one-off sketch show as part of ITV's Text Santa charity initiative which was broadcast on 21st December 2012.

Before the episode in which she was murdered by Richard Hillman aired, ITV aired a promo about Richard killing one of the residents, though she was not featured in it.

"You kept quiet about t'talent round here, kid. I've just seen a right hunk come out one o' them 'ouses." (First line, to Fiona Middleton)

"Richard, what the hell are you doing?" (Final line)