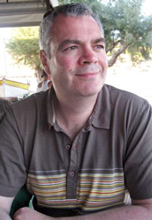 Mark Wadlow has been a member of the Coronation Street script-writing team since 1993 and has contributed 371 scripts to date, including one episode co-credited with Joe Turner and five double episodes co-credited with Damon Rochefort, Jayne Hollinson, Mark Burt and Martin Allen.

He was born in 1963 in Middlesbrough and attended Leeds University in 1982 where he met fellow student Peter Morgan (later to be the screenwriter of the Oscar-winning film The Queen). Morgan had ambitions to be an actor but a bad case of stage fright caused him to team up with Wadlow and the two of them wrote a play entitled Gross based on Wadlow's experience of a summer job in a call centre which brought them to the attention of a training video company producer when it was staged at the Edinburgh fringe. They worked on such productions for the next few years and then moved to films with work on the John Schlesinger's movie Madame Sousatzka in 1989. They also worked on Dear Rosie (1990) and The Secret Touch (1992).

Wadlow and Morgan then split up their partnership and Wadlow moved into television writing with Coronation Street being among his first work for the medium. He has also written for Robin Hood, Holding the Baby and Bad Girls.

Wadlow remains fiercely proud of his Middlesbrough roots and uses any opportunity he can to insert references to his home town into his work, including many passing mentions in his Coronation Street scripts. He currently lives in Shropshire.

Retrieved from "https://coronationstreet.fandom.com/wiki/Mark_Wadlow?oldid=366232"
*Disclosure: Some of the links above are affiliate links, meaning, at no additional cost to you, Fandom will earn a commission if you click through and make a purchase. Community content is available under CC-BY-SA unless otherwise noted.