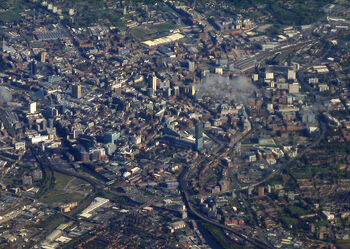 Manchester is a city in the north-west of England. Although it covers an area of only 44.65 square miles and has a population of just over half a million residents, it is the largest one by some considerable margin of the ten metropolitan boroughs which make up the county of Greater Manchester. The Greater Manchester Built-up Area is an area of land defined by the Office for National Statistics (ONS), consisting of the large conurbation that encompasses the urban element of the City of Manchester and the continuous metropolitan area that spreads outwards from it, forming much of Greater Manchester in North West England. With the latter’s population of 2,553,379, it is the second most populous conurbation in the United Kingdom after the Greater London Built-up Area and the thirteenth largest in the European Union.

The history of Manchester began with the Roman fort of Mamucium, (from which is derived the name of the city’s inhabitants - Mancunians) which was established around AD 79 near the confluence of the rivers Medlock and Irwell. Thereafter it remained a small and unimportant town until the 14th century, when it received an influx of Flemish weavers who established it as a centre of textile manufacturing. This expanded at a considerable rate in the 1700s with the opening up of navigable waterways including the Bridgewater Canal in 1761, bringing coal from mines at Worsley to central Manchester which, when extended to Runcorn, halved the cost of the transport of raw cotton shipped in from the United States of America. Richard Arkwright opened his first mill for spinning cotton in 1780 in Manchester which included a number of his own inventions for industrialising the process and the town expanded at such a rate that by 1835 it was "without challenge the first and greatest industrial city in the world”. Its adjoining settlements, such as Salford, expanded at the same rate. Along with several hundred mills, the surrounding lands were quickly urbanised to provide accommodation for its workers.

This formed the basis for the world depicted in Coronation Street: a working class community living in a typical terraced street of houses within an industrialised landscape built in the late nineteenth century and early twentieth century. All over Manchester and its surrounding towns and boroughs many such streets sprang up, many of them low-cost builds with basic amenities whose residents were constantly on the breadline and who suffered badly in times of recession and depression but who nevertheless built up a strong sense of community with a combination of self-help and neighbourly togetherness. In parts of the real Manchester, typically those near the earliest mills, rank poverty was the way of life of the people who survived day-to-day in squalor during the Victorian times.

This existence brought in a strong reaction against its conditions and Manchester was considered for many years a centre of left-wing politics. Friedrich Engels' work The Condition of the Working Class in England in 1844 was based on a two year stay in Manchester and Karl Marx visited him there and saw the conditions for himself. The Cooperative movement began in nearby Rochdale and the first Trades Union Congress was held in Manchester in 1868.

The industrial base of Manchester, granted “city status” in 1853 (as was Salford in 1926) declined in the early to mid-Twentieth Century, ironically just before the prosperity of many of its inhabitants improved. The area overcame the loss of large parts of its older industries and began to rely more and more upon its newer ones such as media and technology. This included the beginning of Granada Television in the city on 3rd May 1956 whose studios were based on the extreme west-side of the city centre on the site of former industrial buildings. Until 1974, Manchester was within the county of Lancashire but the establishment of the county of Greater Manchester in that year created its own major conurbation. For many people outside of the region, the city of Manchester is still synonymous with the county of Greater Manchester but people in the adjoining areas, especially Salford, have a strong sense of their own local identity. Within the fictional world of Coronation Street, Weatherfield is an eleventh borough within the county with its own by-laws, Town Hall, Council, infrastructure and history although the design of the street, based on Archie Street in Salford and demolished in 1971, and the amount of filming conducted in that area over the years, means that for many people Weatherfield is a fictional depiction of Salford.

In the 1950s and for twenty years thereafter, the vast majority of the poorer types of housing were demolished in slum clearances although the housing that replaced them at the time, including high-rise flats and other “brutalist” forms for architecture, arguably didn’t improve matters for many. Some housing schemes such as the overspill estates in areas such as Wythenshawe gave a considerable increase in the standard of living for many though. Today, the number of terraced streets in Manchester and its surrounding areas is low in number compared to previous years but many still remain.

Various parts of the city of Manchester have been used for location filming of Coronation Street since the 1960s and the fact that the Granada, later renamed ITV, studios existed in the city until the end of 2013 means that the vast majority of Coronation Street's narrative has been produced, rehearsed and recorded in the city. The MediaCity studios are now based in the Borough of Trafford on the banks of the Manchester Ship Canal but they are still within the county of Greater Manchester.

Many of the city’s landmarks and buildings have been seen in the programme over the years including Albert Square outside the Town Hall, the Manchester Central Library and Manchester Airport, the third largest in the country. Almost all inhabitants of the county refer to the city centre of Manchester as “town” and any reference by any character within the programme to “going into town” almost always means a trip into the centre of Manchester. The number of times that Manchester has been depicted within the programme as a real place as opposed to the fictional Borough of Weatherfield means that there have been too many instances, many of them one-line references, for them to be listed in this article.