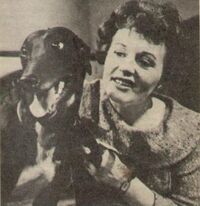 When Harry Hewitt was forced by his wife Concepta to get rid of his Whippets he swapped the pair for the greyhound Lucky Lolita . Initially a success when entered into races, Harry had plans of selling Lolita for a profit. By this time Concepta had grown fond of her and was quietly pleased when a run of losses meant that Lolita would stay a member of the family.

Eventually Harry did sell the dog and used the funds towards the purchase of a saloon car.

The name of the dog who played Lucky Lolita was "Black Star" (though uncredited) and actors Ivan Beavis and Doreen Keogh were so taken with the animal that bought their own racing greyhound, an eighteen-month old called "Rest Camp".

Retrieved from "https://coronationstreet.fandom.com/wiki/Lucky_Lolita?oldid=226870"
*Disclosure: Some of the links above are affiliate links, meaning, at no additional cost to you, Fandom will earn a commission if you click through and make a purchase. Community content is available under CC-BY-SA unless otherwise noted.