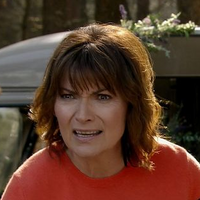 Lorraine Kelly (born 30th November 1959) is a television presenter who is employed at ITV and most recognised for presenting the lifestyle programme Lorraine.

She is one of Coronation Street's most famous fans and has been involved in several different spin-offs. She appeared in the 2011 online series Just Rosie when Rosie Webster modelled on her show. She also played a police officer in the 2012 Text Santa special A Christmas Corrie.

Following the untimely death of Maddie Heath, a memorial charity auction organised by Sophie Webster was held at Nick's Bistro in August 2015 where one of the lots was a signed photograph of Lorraine. The item was snapped up by an inebriated Carla Connor who bid £200 for it, but for reasons unknown, Carla gave the photo to Steph Britton.

Lorraine made a cameo appearance as herself on the programme in May 2019, when she stayed at the same holiday park as the Platt family. She was involved in an unfortunate accident when she was hit in the thigh with an arrow by Gail Rodwell.