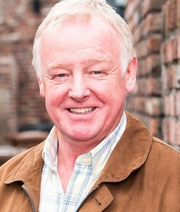 Les Dennis (born as Leslie Dennis Heseltine on 12th October 1953 in Liverpool) is a comedian, television presenter and actor who played the role of Michael Rodwell on Coronation Street from March 2014 to November 2016.

In 1974, he won New Faces, an ITV talent show and appeared on numerous light-entertainment shows. In 1982, he joined as one of the team on Russ Abbot's Madhouse and The Russ Abbot Show before forming a comedy partnership with fellow impressionist Dustin Gee, which in turn led to a series of their own, The Laughter Show. Following Dustin's sudden death on 3rd January 1986, Les carried on the show as a solo performer. He became the third host of Family Fortunes, taking over from Max Bygraves for a fifteen-year run from 1987 to 2002.

Other acting work includes roles in Brookside, Doctors, Crossroads, Casualty, New Street Law, The Bill, Holby City, The Slammer, Life's Too Short and Midsomer Murders. In 2002 he appeared in the second series of Celebrity Big Brother; finishing as runner-up, and appeared in a 2005 episode of Extras in which he once again impersonated famous Street character Mavis Wilton (Thelma Barlow) by saying "I don't really know".