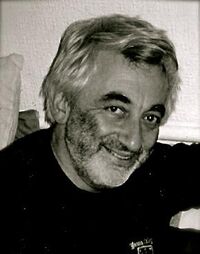 Laurence Moody (born 28th January 1948) has worked as a director on 171 episodes of Coronation Street from March 1974 to February 1980, March 1997 to August 1998 and February 2011 to December 2012. This total includes two episodes co-directed with Stephen Butcher and three with Mary McMurray.

He read English at Cambridge University before being taken on as a trainee at Granada Television.

He also teaches at the National Film and Television School and the London Film School and Drama Centre.

Retrieved from "https://coronationstreet.fandom.com/wiki/Laurence_Moody?oldid=219442"
*Disclosure: Some of the links above are affiliate links, meaning, at no additional cost to you, Fandom will earn a commission if you click through and make a purchase. Community content is available under CC-BY-SA unless otherwise noted.