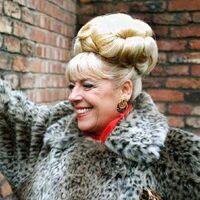 Julie Goodyear MBE (born Julie Kemp 29th March 1942 in Heywood, Lancashire) is an award-winning British actress who achieved iconic status for her portrayal of brassy Rovers Return Inn barmaid-turned-landlady Bet Gilroy, née Lynch, on Coronation Street. The character first appeared on the programme as a factory worker in 1966, and Bet was brought back as a permanent fixture on the Street in 1970, when she became arguably the most famous and popular Rovers' barmaid of all-time. Julie quit the Street in 1995, but returned for the special Coronation Street - After Hours in 1999. In 2002, she made what was intended to be a long-term return to the programme, but Bet was written out after only a handful of appearances when Julie cited exhaustion from the heavy work schedule. Bet Lynch's last appearance on the programme to date were seven episodes filmed on location in Blackpool in 2003.

Married four times, Julie's private life was, over the years, a hot topic for tabloid journalists who saw her own life to be even more colourful than that of the Street character she made her own. In 1979, she beat cervical cancer, but years later would be accused (and found not guilty) of attempting to defraud her own cancer charity. Julie also made headline news in the 1980s for her relationship with homosexual footballer Justin Fashanu.

Away from the Street, Julie has made many television appearances, and has acted in episodes of Nearest and Dearest and Hollyoaks (the latter being her final acting role in a television programme). She won the Lifetime Achievement award in 1995 at the inaugural National Television Awards, and was awarded the MBE in 1996.

She has appeared in pantomimes, commercials and her 2006 autobiography Just Julie entered the best-sellers lists. In 2012, she appeared as an inmate in Celebrity Big Brother, and in 2018, she appeared on an edition of The Big Soap Quiz: Corrie vs Emmerdale - dressed as Bet - and in the capacity of a 'mystery guest' who Jack P. Shepherd and Julia Goulding had to identify.