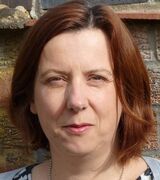 Julie Gearey wrote 43 episodes of Coronation Street between November 1999 and December 2002 including one with David Lane.

Her career began when she was granted a place at the Northern School of Film and Television to study screenwriting where she gained two mentors, Tom Needham and Jan McVerry who gave her support, contacts and assistance to get her first jobs. She has also penned scripts for Casualty, Secret Diary Of A Call Girl and Prisoner's Wives.

Retrieved from "https://coronationstreet.fandom.com/wiki/Julie_Gearey?oldid=168140"
Community content is available under CC-BY-SA unless otherwise noted.