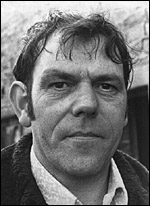 Jim Allen (born Manchester 7th October, 1926 - 24th June, 1999) wrote 36 episodes of Coronation Street between January 1965 and September 1967. His other writing credits include five episodes of the Play for Today series.

A strongly left-wing writer, he was totally dismissive of the programme, saying, "I had seen and lived through much, and was eager to give expression to something more substantial than cardboard characters filled with self-admiration. With one or two exceptions, the actors were all working-class Tories acting like thirty bob millionaires. When a new face joined the writers’ team he was looked upon as a threat, but in my case they needn’t have worried because I had no intention of staying long."

The one writer that Allen did have time for was John Finch who introduced him to Tony Garnett and through him gained him work at the BBC and a working association with Ken Loach.

Allen said that he found the programme "dull and lifeless," but admitted that working on Coronation Street was a great learning experience. However, he can’t have endeared himself to his colleagues when he suggested that they take the characters on a coach trip to the Lake District and drive the coach off a cliff, killing them all, claiming it would a ratings winner. Ironically, such a suggestion was (partially) carried out in 1969 in one of the programme's best remembered storylines of the late 1960s.

Allen wrote a television play, The Talking Head which was broadcast on 30th August 1969. The play was "an attack on soap operas and perennial series." In TV Times he said it "revolves around the problems of creative work in television. It pivots on a particular writer of a typical hack serial that is running indefinately. It suddenly dawns on him one day that he is churning out conveyor-belt style garbage and explodes". He went on to say in reference to his previous life as a bricklayer that he would "rather carry bricks than finish up a highly paid hack. At least it's honest work."

Retrieved from "https://coronationstreet.fandom.com/wiki/Jim_Allen?oldid=319997"
*Disclosure: Some of the links above are affiliate links, meaning, at no additional cost to you, Fandom will earn a commission if you click through and make a purchase. Community content is available under CC-BY-SA unless otherwise noted.