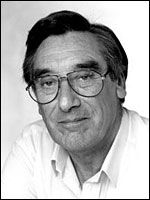 Jack Morris Rosenthal CBE (8th September 1931 - 29th May 2004) was one of the most prolific and significant of Coronation Street writers in its formative years. He contributed 130 scripts to the series, four of them co-written with Adele Rose and Harry Driver.

Born in Cheetham Hill, Manchester he was educated at Sheffield University and served his national service with the navy. A short career in advertising followed before he became a television writer, working extensively for Granada at the start of his career.

As well as writing episodes of Coronation Street he helped launch the spin-off sitcom Pardon the Expression, contributing six scripts, as well as creating popular sitcoms such as The Dustbinmen and The Lovers. Among the cast of The Dustbinmen was Graham Haberfield in his first television star role, as well as guest spots for Paula Wilcox, Julie Goodyear, Bryan Mosley and Barbara Knox. The Lovers featured Wilcox, Richard Beckinsale and Joan Scott.

Other television work includes the drama London's Burning, developed from his initial script into a long-running drama series.

His film credits include Yentl, and semi-autobiographical works such as Bar Mitzvah Boy (for which he won one of his three BAFTAs). He also wrote stage plays, musicals, and monologues for television. His wife of nearly thirty years, Maureen Lipman was often cast in his scripts.

A major television writer, his autobiography (By Jack Rosenthal) was published posthumously and Network DVD released Jack Rosenthal at ITV, a five-disc compilation of some of his best and most significant work, including an episode of Coronation Street and two episodes of Pardon the Expression.