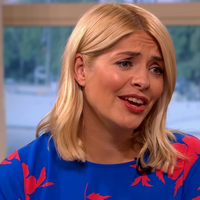 Holly Willoughby (born 10th February 1981) is a television presenter who is employed at ITV, who is most recognised for presenting the lifestyle programme This Morning.

She made a cameo appearance as herself on Coronation Street along with co-presenter Phillip Schofield in June 2018, when they interviewed Rosie Webster, Craig Tinker and Gemma Winter in their role in a drugs bust at Underworld.

Retrieved from "https://coronationstreet.fandom.com/wiki/Holly_Willoughby?oldid=310726"
*Disclosure: Some of the links above are affiliate links, meaning, at no additional cost to you, Fandom will earn a commission if you click through and make a purchase. Community content is available under CC-BY-SA unless otherwise noted.