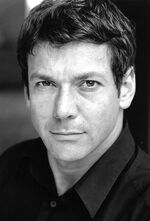 Gray O'Brien was born 11th August, 1968 in Scotland and appeared in Coronation Street as Tony Gordon from September 2007 to December 2009, with a brief return from May to June 2010.

Gray joined the cast of Coronation Street in August 2007, in which his character acted as the new love interest to Alison King's character Carla Connor, and was involved in a murder storyline involving Liam Connor (Rob James-Collier).

Gray was originally going to leave the series at the end of 2009 following the conclusion of the storyline, but after meeting with the producers he was convinced to have his contract extended into 2010 in order to conclude the storyline, but was granted a break in order to appear in a pantomime over the Christmas period.

In November 2019, it was reported that Gray had been battling stage 4 tonsil cancer for three months.

He was previously known to television audiences as Tom Deneley in Peak Practice, Richard McCaig in Casualty and DC Rob Gibson in Taggart as well as appearing in the 2007 Dr Who Christmas Special, "The Voyage of the Damned" as Rickston Slade.

Retrieved from "https://coronationstreet.fandom.com/wiki/Gray_O%27Brien?oldid=357397"
*Disclosure: Some of the links above are affiliate links, meaning, at no additional cost to you, Fandom will earn a commission if you click through and make a purchase. Community content is available under CC-BY-SA unless otherwise noted.