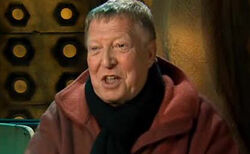 Graeme Harper has worked as a director on Coronation Street since 2005 with 45 episodes to his credit, including one double episode. While he has worked on a wide variety of shows, including The Bill, Casualty, Grange Hill and The New Statesman over the course of his career, he is perhaps best known for his work on Doctor Who. Having made a name for himself directing the show in the mid-1980s, he became one of the show's key directors when it returned to screens in 2005.

It was during this period that he became acquainted with Phil Collinson, the then-producer of Doctor Who, and Harper's work on some of the show's most demanding episodes would subsequently lead to Collinson, who had since become the producer of Coronation Street, giving Harper the responsibility of directing the tram crash which would kick off the show's 50th Anniversary week in December 2010.

Retrieved from "https://coronationstreet.fandom.com/wiki/Graeme_Harper?oldid=201063"
*Disclosure: Some of the links above are affiliate links, meaning, at no additional cost to you, Fandom will earn a commission if you click through and make a purchase. Community content is available under CC-BY-SA unless otherwise noted.