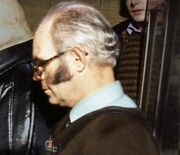 Evacuated from the East End of London during the Second World War to Wales, he spent his formative years in the front seats of cinemas. He acted out the films he had seen to his families and followed a career in the entertainment industry. Directing repertory theatre in Lincoln, he was spotted by a BBC talent scout and worked on episodes of Dr. Finlay's Case Book, Z Cars, Doctor Who and Blake's 7 among others.

Later in his career he directed corporate videos and held classes in television techniques at the Actors' Centre and Bristol University.

Retrieved from "https://coronationstreet.fandom.com/wiki/Gerald_Blake?oldid=343506"
Community content is available under CC-BY-SA unless otherwise noted.