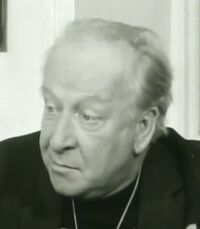 His work was already known to Granada Television as he was the composer of the Biggles series on which Tony Warren was a reluctant and frustrated scriptwriter. He was given the commission to write the theme tune in late November 1960 when he was rung up at his home in Guernsey. In a near-contemporary 1965 interview with Channel Television he recalled:

"There was a phone call from Manchester. 'Would I have lunch the following day in Manchester?' I left on an aeroplane, arrived in Manchester. Had a very good lunch. Was shown a lot of test films of various characters they were using in Coronation Street [the dry runs] and asked to write the music for it. As usual they'd left the music to the last minute and the programme was coming on in a fortnight's time. Well, that's standard practice. And I was briefed very beautifully on this - they wanted something melodic, but not too much so; they wanted something ryhthmic, but it mustn't be jazz; they wanted something exciting but it mustn't be too thrilling, and in the end I was dragged out into the street, it was a typical Manchester day, pouring with rain, and we looked up a little alley, a bit like Coronation Street as it is now, and suddenly the sun broke through the clouds, and the director of the whole epic said, 'That's the music I want'. So I said, 'Why didn't you say so in the first place?' and came back here and wrote it!"

In a much-later 1995 interview on the television programme Good Morning, Tony Warren claimed that Spear wrote two different themes, the first being rejected for being too jolly and he then gave him the direction that he wanted the tune to sound like "a lonely hooter on the ship canal." Whatever the truth of the matter, Eric himself went to London to supervise the recording session to produce the track as there was no time to find musicians in Manchester and he played the finished tune down the phone to Granada. Although there has been some confusion and dispute over this session, it would seem that the lead role of a trumpet was due to be played by Stan Roderick but he asked Ronnie Hunt to take his place. An alternative claim has been made by David Browning that he played the trumpet but this has been disputed by the Musician’s Union. Claims have also been made that the theme tune was re-recorded in 1964 and 1972 but a close hearing of episodes in the 1960s and early 1970s seems to indicate that the theme stayed the same until 1969 when a version slightly slower in tempo was introduced along with the colour title sequence but this replaced in early 1970 with the version that lasted until 2010 when the most radical re-arrangement of the tune in the programme’s history made its debut with Episode 7351 (31st May 2010) . There were also short-term variations in the arrangement in October 1961 and September 1969. Spear received a one-off payment of £6 for his work. 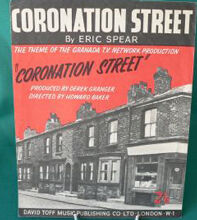 Prior to being a composer, Spear was an actor, working at the Old Vic but turned to composing and conducting in the 1930s. He co-devised a radio programme Melody and Co. in 1940 and at the same time created and presented various other shows such as Ack-Ack, Beer-Beer, Wherever She Goes, Career on the Keys, Happy-Go-Round and produced numerous other programmes for the BBC Forces Network and wartime Home Service. His other television work included incidental music for Strictly Personal, Fabian of the Yard and the theme music composer for Sword of Freedom, The Errol Flynn Theatre and one of the first ever British television soaps - The Grove Family.

His name has continued to appear on almost every single episode of Coronation Street broadcast since Episode 1 (9th December 1960) which makes him one of the most credited names in British television history.