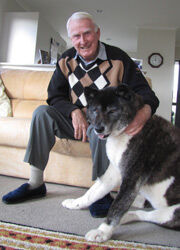 Eric Price is a director who worked on 4 early episodes of Coronation Street from December 1960 to January 1961, being involved in the set-up of the programme along with fellow directors Derek Bennett and Michael Scott.

Born in New Zealand, he moved to the UK in the early 1950s on a Government bursary to study production abroad. He'd previously worked as a physical education teacher and had also been involved with the Auckland Amateur Operatic Society, touring the country, singing and dancing, with the Australian company J.C. Williamson and also being involved in some local film-making. He attended the Central School of Speech and Drama as a graduate student along with Vanessa Redgrave and Dame Judi Dench and later started working for Ealing Films as an assistant director, working on films such as Dunkirk, Scapegoat and The Inn of the Sixth Happiness.

He then joined Granada Television and, like Tony Warren, also worked on the their Biggles series. He continued to work as a director in television until the early 1970s, directing programmes such as Paul Temple, The Plane Makers, Follyfoot, Softly Softly, The Borderers, Dr Finlay’s Casebook and The Onedin Line. He produced and directed Ryan International, a 1970 adventure series about a lawyer in France. Working for the Thompson Media Group in the early 1970s, he then helped set-up television and radio stations in developing countries such as Jamaica, Addis Ababa, Barbados and Mexico before returning to his native country in the middle of the decade to introduce colour television there and working on programmes such as Frost Over New Zealand, Top Town, Mastermind, Town Cryer and Moynihan. Before retiring, he joined New Zealand News as the managing director of Vid Com which set-up the country's first private film and television studio, and pioneered international conferencing. He later formed his own production company which specialised in TV commercials, industrial documentaries and media training. His final job was at the Bank of New Zealand as an investment advisor.

Living in Summerset Falls, New Zealand, he now coaches golf in his retirement as well as reading and dog walking.