During the day, Piggotts' twin sons Vic and Bob were looked after by Ivy Makepiece at No.11 but Emma gave up work to look after them herself as Ivy neglected them to drink. When the war started, Vic and Bob signed up, but it was to be the last time Emma saw her sons. When she received news of their deaths, Emma tried to track down Alice Buck, who in 1914 had told Emma she was carrying Vic's baby and then fled Weatherfield when Emma called her a liar and slapped her. Emma failed to find Alice, and when the reality of her sons' deaths hit her, she succumbed to influenza and died.

Emma first appeared in Daran Little and Bill Hill's "Weatherfield Life", published in 1992. Other information is derived from Little's follow-up book, "Around the Coronation Street Houses". 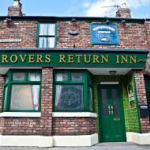