Elliott & Son (formerly Elliott's Butchers in Nelson Street) was renamed and - after leasing out space for a butchery counter in Freshco - relocated to 14 Victoria Street in November 2000 after Fred Elliott took a two-year lease out on the unit from Duggie Ferguson in August that year. The business was bequeathed to his son, Ashley Peacock following Fred's death in October 2006. The butchers had the telephone number of 0161-715-4912.

The business closed down in December 2010 when Ashley was killed as a result of a tram crash. Following a string of ugly encounters with Tracy Barlow who constantly insulted her late-husband, wife Claire left Weatherfield in January 2011 to start a new life in France with boys Joshua and Freddie after Claire found out that she might be formally charged with assault. In September it was shown that Kirk Sutherland (who was briefly employed by Ashley a few years prior) still had the keys to the property and his friends used it to temporarily imprison drug dealer Leon Southam in the large freezer.

In December of the following year, Kirk learned from Chesney Brown that a fellow market-trader was looking to offload 200 frozen turkeys and enlisted help from a young Craig Tinker when he decided to store and sell them from the premises. Plans were quickly thwarted when the pair discovered that there was no electricity supply and resorted to running an extension lead across the street from their flat at 9a Rosamund Street. After a few days of disappointing sales, Chesney informed them that they were attempting to sell stolen goods and the frozen turkeys were quickly disposed of in the canal.

In October 2014, Yasmeen Nazir began renting the property and with the help of her husband Sharif, opened a community centre named Jamila House. 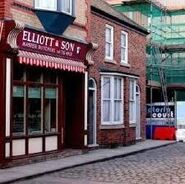 Add a photo to this gallery
Retrieved from "https://coronationstreet.fandom.com/wiki/Elliott_%26_Son?oldid=331229"
Community content is available under CC-BY-SA unless otherwise noted.