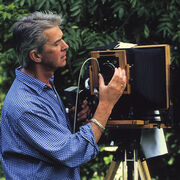 Ed Buziak designed 192 episodes of Coronation Street July 1972 to July 1974. A major contribution during his time to the programme was the set for the first incarnation of The Kabin when it was situated on Rosamund Street, a location which remained a staple of the show from May 1973 to April 1990.

He studued Interior Design at the Manchester College of Art in the 1960s, then after his work at Granada Television he turned to editorial photography full-time. He published his own images for many years and then turned to magazine publishing on the subject of darkroom equipment and techniques. Rejecting the technicalities which enhance digital images, he has since returned to artwork and lives in France where he has taken up citizenship of that country.