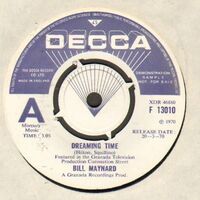 Dreaming Time was a song whose lyrics were composed by a 24-year old Sheffield housewife named Joan Squillino that was set to music by long-term Granada Television musician Derek Hilton and which featured in a Coronation Street storyline in March 1970 when Stan Ogden tried to pass off the tune as his own when Ena Sharples had been the original composer. Although snatches of the song had been heard in various episodes of the storyline, it was performed in full in Episode 961 (11th March 1970) when a scowling Ena watched it performed by singer Mickie Malone at Kitty Stonely's pub, the Robin Hood.

Sung by actor Bill Maynard (who played Malone), it was released as a Decca record on 20th March 1970 with the B-side being Moments of Pleasure (also by Hilton and Squillino). Although publicised in the 2nd to 8th May edition of TV Times, it failed to dent the charts and was soon deleted.

People passing by,
Faces passing by,
All the times are changing
Tell me how can I?
Time does not stand still,
Only in our minds,
Sharing our loving,
Till the end of time.
All the dreams we planned,
Passing through the sand,
Folding pages,
With someone’s helping hand.
Just tell me what to do,
As I pass my time with you,
Help me to forget the time.