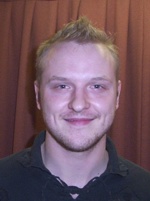 Dominic Leclerc gained in 2004 a year's sponsorship from Channel 4 for a programme to fund trainee theatre directors. He is also a choreographer who extensively for Sheffield Theatres and worked on many productions on the stage in that role and as assistant director, in particular a production of A Midsummer's Night Dream for the Regent's Park Open Air Theatre. He won the Oxford Samuel Beckett Award and the David Fraser Bursary and, making his move into television, directed 30 episodes of Coronation Street from April 2008 to April 2011. He has also worked on Holby City, Emmerdale, Casualty, Skins, Shameless and The Village.

Retrieved from "https://coronationstreet.fandom.com/wiki/Dominic_Leclerc?oldid=212100"
*Disclosure: Some of the links above are affiliate links, meaning, at no additional cost to you, Fandom will earn a commission if you click through and make a purchase. Community content is available under CC-BY-SA unless otherwise noted.