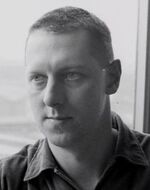 Derek Bennett (born 5th November 1930 in Birmingham, died in 2005) was the director of the first episode of Coronation Street in December 1960 working closely with Tony Warren, Margaret Morris and Stuart Latham in choosing actors who would become household names for the remainder of their careers. He directed a total of 22 episodes for the programme.

Prior to that he worked for Granada Television on Biggles, Skyport and Knight Errant Limited and later on for the same company on The Odd Man, Bootsie and Snudge, Maupassant and The Caesars. Other directing credits include Upstairs, Downstairs (twelve episodes including the first version of episode one which was unbroadcast due to the ITV colour strike) and Rumpole of the Bailey. He was also a producer on shows such as Beryl's lot and Lytton's Diary, which he would often also direct.

He retired from television in 1990. In the 2010 drama The Road to Coronation Street he was portrayed by Shaun Dooley.

Retrieved from "https://coronationstreet.fandom.com/wiki/Derek_Bennett?oldid=340833"
*Disclosure: Some of the links above are affiliate links, meaning, at no additional cost to you, Fandom will earn a commission if you click through and make a purchase. Community content is available under CC-BY-SA unless otherwise noted.