Dennis Stringer worked with Les Battersby on community service for non-payment of parking fines. Dennis was a Hell's Angel until he had to sell his motorbike - or 'hog' - after a divorce. The replacement, a Morris Traveller, didn't quite have the image the Chapter were looking for and they threw him out. He developed from a friend of Les into the partner of Eileen Grimshaw.

Dennis ended up living with the Battersbys, and in 2001 he and Janice Battersby fell for one another in the process. They left their respective partners to live together. Following this, a devastated Les attempted suicide by gassing himself in his car. Dennis prevented the suicide, but while driving Les to Weatherfield General, died in a head-on collision with another car. Les survived.

After Dennis died Janice's employer Mike Baldwin was sympathetic and told her to take as much time off as she needed and offered to help in any way he could. Janice's daughter Toyah gave a reading at his funeral.

The character was credited as Denis Stringer in his first three appearances. 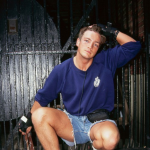