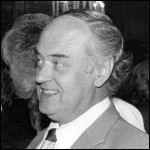 Dennis Spooner (1st December, 1932 - 20th September, 1986) was a prolific television scriptwriter and story editor, perhaps best known for his work on Doctor Who and numerous ITC shows such as Thunderbirds and Captain Scarlet. He co-created Man in a Suitcase with Richard Harris, and The Champions, Department S, Jason King and Randall and Hopkirk (Deceased) with Monty Berman.

Dennis's contribution to Coronation Street was just one instalment - Episode 87 (11th October 1961) - however he also co-wrote an episode of the spin-off Pardon the Expression (The Little Boy Lost) in 1965. He passed away in 1986 after suffering a heart attack, aged 53.

Retrieved from "https://coronationstreet.fandom.com/wiki/Dennis_Spooner?oldid=230192"
*Disclosure: Some of the links above are affiliate links, meaning, at no additional cost to you, Fandom will earn a commission if you click through and make a purchase. Community content is available under CC-BY-SA unless otherwise noted.